Too many Tumblr images had tainted my mind with what it meant to have the perfect atmosphere to write. Girls cozied up in tiny nooks with quilts (how they fit perfectly in there is beyond me), writing in their leather-bound journals gazing out of the window like some Nicholas Sparks lead. Their rooms always had candles. The ones that smelled like lavender or some other relaxing scent that probably didn’t even exist in real life.

And here I was. Waiting.

Turns out that blaming my lack of productivity in not having the perfect place to write was a great excuse not to write. I didn’t have to admit that I was afraid of pouring my thoughts out onto paper for people to read. Didn’t have to say that I was fearful of never being good enough. I could just blame it on my environment instead.

Somewhere between then and now, I learned that waiting for those perfect moments and environments was similar to waiting on a decent Terminator sequel. Unrealistic and never gonna happen.

I’m learning instead that if you love something and want to do it for the rest of your life you’ll make time for it, even in uncomfortable environments and situations. You’ll write on the backs of receipts from the darkest depths of your bag or on those paper coasters at that one bar. You’ll scribble in your notebooks on the train and jot down character notes in the weird smelling taxi.

You’ll get it done. If that’s what you desire.

I could keep saying that I don’t have a cozy Nicholas Sparks window nook to gaze out of. Or I could just write.

*All photos were taken by me unless otherwise stated. Please ask permission before using. 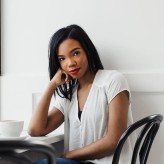 A Holiday At Hotel Phillips

5 Favorite Coffee Shops To Read From